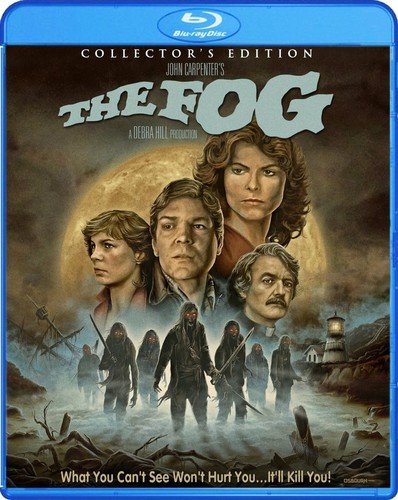 When the fog rolls in... the terror begins This moody horror classic from master of terror John Carpenter (The Thing) and producer Debra Hill (Escape from New York) stars Adrienne Barbeau (Swamp Thing), Jamie Lee Curtis (Halloween), Tom Atkins (Halloween III: Season of the Witch), Hal Holbrook (Creepshow) and Janet Leigh (Psycho). Don’t get lost in the fog... The sleepy seaside village of Antonio Bay is about to learn the true meaning of the word vengeance. For this seemingly perfect town masks a guilty secret... a past steeped in greed and murder. Exactly 100 years ago, a ship was horribly wrecked under mysterious circumstances in a thick, eerie fog. Now, shrouded in darkness, the long dead mariners have returned from their water grave to exact a bloody revenge. Additional Features ------------------- Scream Factory continues its impressive track record of presenting classic '70s and '80s horror titles in deluxe Blu-ray packages with this release of John Carpenter's The Fog. The extras here are a mix of features ported over from earlier home video presentations (the 1995 laserdisc and the 2002 Special Edition DVD from MGM) and new material produced specifically for the Blu-ray disc. Chief among the latter is an engaging interview with star Jamie Lee Curtis, who discusses her work on the film and other horror titles like Terror Train (1980) and (of course) Carpenter's Halloween. Curtis is remarkably frank about The Fog, which she describes as "not her cup of tea," as well as the peaks and valleys of her early career, and details her personal relationship with Carpenter and especially the late producer Debra Hill, as well as the impact that their post-Halloween breakup had on her and the making of The Fog. An additional wealth of production anecdotes can be found on a new commentary track featuring stars Adrienne Barbeau and Tom Atkins with production designer and frequent Carpenter collaborator Tommy Lee Wallace, who offer warm and frequently funny observations on the picture; it's a lighthearted counterpart to the no-nonsense commentary by Carpenter and Hill (culled from the laserdisc), which balances technical observations with a straightforward and detailed account of the film's production troubles and their struggles with the studio. Cinematographer Dean Cundey also addresses the difficulties in working under a limited budget in an 18-minute interview that also touches on his other projects with Carpenter, including Halloween and The Thing. All three filmmakers are also front and center on a 28-minute making-of featurette, Tales from the Mist (taken from the MGM DVD), which includes interviews with Barbeau and costar Janet Leigh, who are also featured in the 1980 Universal promotional video Fear on Film: Inside The Fog along with an animated Curtis. There's also an episode of Sean Clark's humorous documentary series Horror's Hallowed Grounds, which visits the film's Northern California coastal locations, as well as a storyboard-to-film comparison of the deadly encounter between the ghost crew of the Elizabeth Dane and trawler fishermen John F. Goff and George "Buck" Flower. The disc is rounded out by an array of theatrical trailers, TV spots, an outtake reel, additional storyboards, and promotional photos, as well as an easy-to-find Easter Egg that offers an intro (with appropriately sinister voice-over by the great Ernie "Ghoulardi" Anderson) for an early '80s TV broadcast of The Fog on the ABC Sunday Night Movie. --Paul Gaita
Show More
Reviews