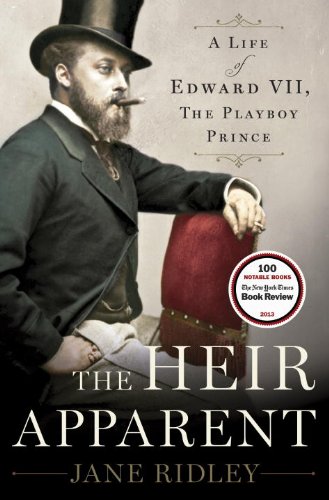 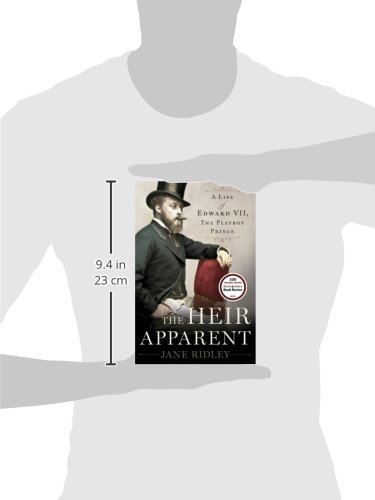 *Starred Review* Long-lived Queen Victoria had an era named after her, as did her long-waiting heir when he
eventually succeeded to the British throne. Edward VII was an absolute style icon and knew how to enjoy a good party and
a robust liaison with a pretty—and willing—woman. The term “Edwardian” thus became associated with high fashion and high
living. The title of Ridley’s biography of King Edward is appropriate to the popular sense of the monarch, that his life
was defined by his many years as the indulged and indulgent Prince of Wales. But significant research stands behind the
author’s more judicious understanding of the man, that the “dissipated prince evolved into a model king.” Barred by his
mother from any participation in royal duties out of her obsessive conviction that her son was not of sufficiently solid
material to follow her on the throne, Bertie turned, in compensation, to hot pursuit of pleasure, garnering a reputation
for playing not only hard but even scandalously. Nevertheless, upon the old queen’s demise in 1901 and his own
accession, Edward rose to the occasion to be Britain’s first constitutional monarch as we define that role today,
modernizing the monarchy and making it stronger. A top-notch royal biography for all active British-history collections.
--Brad Hooper

“If [The Heir Apparent] isn’t the definitive life story of this fascinating figure of British history, then
nothing ever will be.”—The Christian Science Monitor

“The Heir Apparent is smart, it’s fascinating, it’s sometimes funny, it’s well-documented and it reads like a novel,
with Bertie so vivid he nearly leaps from the page, cigars and all.”—Minneapolis Star Tribune

“I closed The Heir Apparent with admiration and a kind of wry exhilaration.”—The Wall Street Journal

“Ridley is a serious scholar and historian, who keeps Bertie’s flaws and virtues in a fine balance.”—The Boston Globe

“A top-notch royal biography . . . The title of Ridley’s biography of King Edward is appropriate to the popular sense of
the monarch, that his life was defined by his many years as the indulged and indulgent Prince of Wales. But significant
research stands behind the author’s more judicious understanding of the man, that the ‘dissipated prince evolved into a
model king.’”—Booklist (starred review)

“[A] marvelously rich biography of Edward VII . . . Readers both general and specialized will delight in Ridley’s work;
it raises the bar for royal biographies to come.”—Publishers Weekly (starred review)

“A highly readable, definitive biography of Queen Victoria’s son, the ‘black sheep of Buckingham Palace,’ who matured
into an effective monarch . . . [A] top-notch life of the king . . . There is no shortage of biographies of Edward VII,
but this thick, lucid and lively history deserves pride of place on the shelf.”—Kirkus Reviews (starred review)

“Ridley has written a marvellous biography. Her book is racy and pacy, filled with delicious descriptions of grand
Edwardian shooting parties, cutting-edge fashion and, of course, a string of beautiful society women. But she is never
trivial, and nor is her Bertie.”—The Mail on Sunday

“Ridley’s definitive biography is a remarkable achievement. Entertaining, readable and illuminating, this
much-anticipated reappraisal of a fascinating life is a brilliant tour de force.”—Bridlington Free Press

“Bertie, as he was universally known, couldn’t do anything without it being commented on and often distorted. Though
the gossip columnists had plenty of material to work with, they only told part of the story. [Ridley] does an excellent
job of redressing the balance.”—Financial Times

Shop the largest choice of Biographies And Memoirs online in the UAE. Browse thousands of great deals on jane ridley products with fast, free delivery.