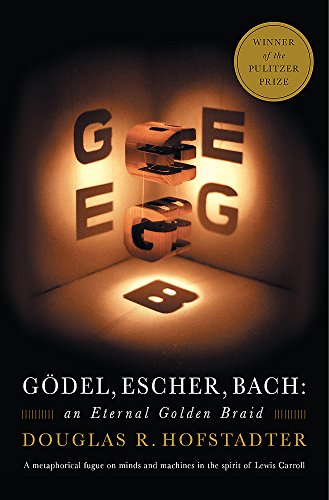 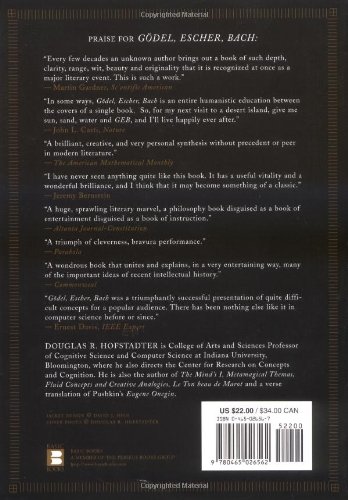 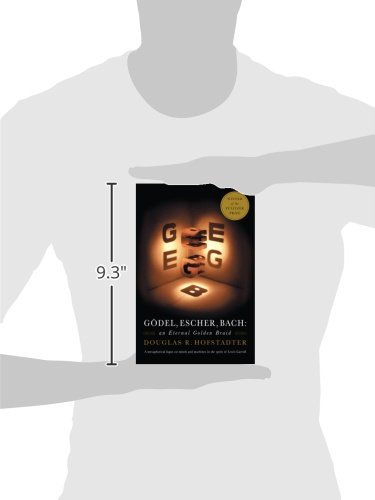 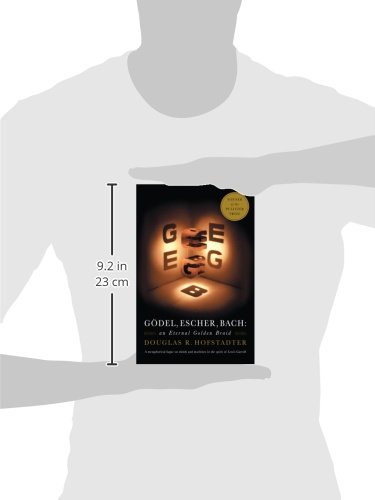 Twenty years after it topped the bestseller charts, Douglas R. Hofstadter's Gödel, Escher, Bach: An Eternal
Golden Braid is still something of a marvel. Besides being a profound and entertaining meditation on human thought and
creativity, this book looks at the surprising points of contact between the music of Bach, the artwork of Escher, and
the mathematics of Gödel. It also looks at the prospects for computers and artificial intelligence (AI) for mimicking
human thought. For the general reader and the computer techie alike, this book still sets a standard for thinking about
the future of computers and their relation to the way we think.

Hofstadter's great achievement in Gödel, Escher, Bach was making abstruse mathematical topics (like undecidability,
recursion, and 'strange loops') accessible and remarkably entertaining. Borrowing a page from Lewis Carroll (who might
well have been a fan of this book), each chapter presents dialogue between the Tortoise and Achilles, as well as other
characters who dramatize concepts discussed later in more detail. Allusions to Bach's music (centering on his Musical
Offering ( /exec/obidos/ASIN/B0000041A6/%24%7B0%7D )) and Escher's continually paradoxical artwork (
/exec/obidos/ASIN/0810981130/%24%7B0%7D ) are plentiful here. This more approachable material lets the author delve into
serious number theory (concentrating on the ramifications of Gödel's Theorem of Incompleteness) while stopping along the
way to ponder the work of a host of other mathematicians, artists, and thinkers.

The world has moved on since 1979, of course. The book predicted that computers probably won't ever beat humans in
chess, though Deep Blue beat Garry Kasparov in 1997. And the vinyl record, which serves for some of Hofstadter's best
analogies, is now left to collectors. Sections on recursion and the graphs of certain functions from physics look
tantalizing, like the fractals of recent chaos theory. And AI has moved on, of course, with mixed results. Yet Gödel,
Escher, Bach remains a remarkable achievement. Its intellectual range and ability to let us visualize difficult
mathematical concepts help make it one of this century's best for anyone who's interested in computers and their
potential for real intelligence. --Richard Dragan

Winner of the Pulitzer Prize in General Nonfiction

Winner of the National Book Award in Science

"Every few decades an unknown author brings out a book of such depth, clarity, range, wit, beauty and originality that
it is recognized at once as a major literary event. This is such a work."

"In some ways, Godel, Escher, Bach is an entire humanistic education between the covers of a single book. So, for my
next visit to a desert island, give me sun, sand, water and GEB, and I'll live happily ever after."

"A brilliant, creative, and very personal synthesis without precedent or peer in modern literature."

"I have never seen anything quite like this book. It has a youthful vitality and a wonderful brilliance, and I think
that it may become something of a classic."

"A triumph of cleverness, bravura performance."

"A wondrous book that unites and explains, in a very entertaining way, many of the important ideas of recent
intellectual history."

"Godel, Escher, Bach was a triumphantly successful presentation of quite difficult concepts for a popular audience.
There has been nothing like it in computer science before or since."

Shop the largest choice of Computers And Technology online in the UAE. Browse thousands of great deals on douglas r. hofstadter products with fast, free delivery.